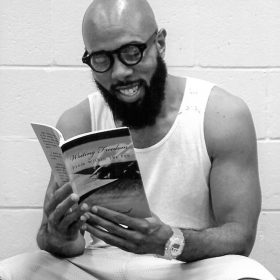 Uncommon
Often on the compound, niggas’ll call me or say I look like Common
Even the C.O.s’ll say, “You look like that actor”
Not having knowledge of Common Sense the rapper
I occasionally tell people common sense ain’t common
Due to different backgrounds and points of view,
People just don’t think the same
I even feel like that about Dude
The man they say I look like ain’t common, and here’s what I’m saying
Dude came from the hood, became a B-boy, rapper, and made it to the silver screen Moms moved me from the hood, I became a D-boy, sold crack, and left a murder scene
In my opinion, oh boy is exceptional
Few have done what he did
Playing roles opposite Paula Patton
Wit her fine ass
Having relationships with Erykah and Serena
Wit they beautiful, thick, bad asses
Then having the good fortune to be part of Hip hop and cinema classics
That’s uncommon
Being a Black man in prison
That’s common
Being a distributor and user of narcotics
That’s common
Leaving a woman behind to raise a child
That’s common
Using violence and leaving a mama crying
That’s common
I guess that makes me a common mutha fucka
A common nigga
So when they ask, “Do you know who you look like?”
I answer for them, “Common”
Wishing I could be in his place
Or like him, be doing something better
Using my words, performing in shows, being in commercials and motion pictures
Yea, I wouldn’t mind that at all
I don’t mind being said to look like Common
I just mind being a common nigga
I’d rather be uncommon

Live from the Pen
Jamar Russell

Success! You're signed up.