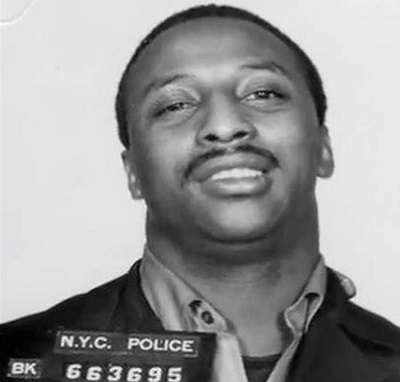 Frank Larry Matthews (born February 13, 1944), also known as Black Caesar, Mark IV and Pee Wee, was a drug trafficker who sold heroin and cocaine throughout the eastern United States from 1965 to 1972. At the peak of his career he operated in 21 states and supplied drug dealers throughout every region of the country. The Drug Enforcement Administration (DEA) ranks him as one of the top 10 drug traffickers in U.S. history and he is estimated to have had $20 million in savings.

He led a flamboyant lifestyle, with luxury homes, vehicles and clothing along with prime seats at sporting events and regular trips to Las Vegas, Nevada to launder money and gamble. Matthews hosted an African-American and Hispanic drug dealers summit in Atlanta, Georgia in 1971 and another in Las Vegas in 1972 to discuss how to break the Italian Mafia control of heroin importation. Matthews was arrested in 1973 on tax evasion and drug charges but disappeared and has been a fugitive from justice ever since.

Matthews was born on February 13, 1944 in Durham, North Carolina. His mother died when he was four years old and he was raised by his aunt, Marzella Steele, the wife of a Durham police lieutenant. He was nicknamed “Pee Wee” and attended the East End Elementary school but dropped out of school in the seventh grade. At age 14, he led a teenage gang in stealing chickens from local farms. When confronted by a farmer Matthews assaulted him with a brick. He was arrested in October 1960 and served a year for theft and assault at the Raleigh State Reformatory for Boys in Raleigh, North Carolina. Upon his release, he moved to Philadelphia, Pennsylvania, where he worked as a numbers writer. In Philadelphia, he made contacts that would become his future Philadelphia drug connections including Major Coxson and members of the Black Mafia. He was arrested in 1963 and avoided conviction by agreeing to leave Philadelphia. He moved to the Bedford Stuyvesant area of New York City and became a barber, collecting numbers as he had in Philadelphia, as well as working as a collector and an enforcer.

In 1965, Matthews grew tired of the numbers game and began to transition into the heroin drug trade in order to make more money. In the early 1960s, the main supply of wholesale heroin was the Italian Mafia through their famed French Connection. Matthews attempted to partner with the Gambino family and Bonanno family, both part of the Five Families that controlled organized crime in New York City since the 1930s, however, both organizations declined. From his days in the numbers game he knew of “Spanish Raymond” Márquez, a prolific Harlem numbers operator. Márquez put him in contact with “El Padrino”, the New York Cuban Mafia godfather Rolando Gonzalez Nuñez, a major Cuban cocaine supplier, shortly before Gonzalez fled to Venezuela because of an upcoming indictment in the United States. Before fleeing, Gonzalez sold Matthews his first kilo of cocaine for $20,000, with a promise to supply more in the future. This relationship expanded into a lucrative and expansive drug trafficking network.

Gonzalez began sending Matthews large loads of cocaine and heroin from South America. Matthews expanded on this and, within a year, was one of the major players in the New York drug business. Realizing the need for diversification, Matthews would continually seek out new sources of supply for narcotics, willing to do business with anyone as long as the product was sufficiently pure. Matthews also developed a cocaine dependence that grew along with his business and power.

By the early 1970s, the Matthews organization was handling multimillion-dollar loads of heroin. The IRS estimates that he earned over $10 million in 1972. According to the DEA, “Matthews controlled the cutting, packaging, and sale of heroin in every major East Coast city.” In New York City, he operated two massive drug mills in Brooklyn: one located at 925 Prospect Place, nicknamed the “Ponderosa”, and the other at 101 East 56th Street nicknamed the “OK Corral”. Both locations were heavily fortified and secured, with walls reinforced with steel and concrete and protected by guards with machine guns. Besides controlling the retail sale of heroin, the organization supplied other major dealers throughout the East Coast with multi-kilogram shipments for up to $26,000 per kilogram.

Matthews purchased a house in the Mafia enclave in Todt Hill, Staten Island right across the street from the crime boss, Paul Castellano.

He was known to supply heroin to Philadelphia through Major Coxson who then sold it to the Black Mafia.

Matthews would take multiple trips to Las Vegas with suitcases full of cash to have the drug money laundered at casinos for a fee of 15-18%.

In 1971, Matthews invited major African-American and Hispanic drug traffickers throughout the country to attend a meeting in Atlanta. The DEA became aware of the meeting and monitored who attended. The topic of the meeting was how to import heroin without the Mafia. Those present decided to build stronger independent relationships with the Corsicans and possibly Cubans. In addition, they agreed to diversify their product to include cocaine, which was becoming available in massive quantities.

This gathering of major drug traffickers throughout the United States is significant because it represented the changing nature of the drug business. Whereas, previously, the Italians controlled the importing and wholesaling of narcotics, therefore controlling who could and could not advance past them, now others were establishing their own pipelines. Before, the Mafia asserted behind-the-scenes control of the business while African-Americans sold and used the drugs in their cities; now the black dealers established connections and took control of their neighborhoods. This later evolved to include not just black people controlling the business, but also local gangs of black people eliminating out-of-town black suppliers trying to control their neighborhoods from a distance.

Matthews clashed with the Black Mafia and on Easter Sunday in 1972 in Atlantic City, New Jersey the Black Mafia killed Tyrone “Mr. Millionaire” Palmer, Matthews’ main dealer in Philadelphia, at the “Club Harlem” packed with 600 people. Many innocent bystanders were shot during the shoot-out with five people killed and twenty-six injured. No one was prosecuted for the crime and none of the 799 potential witnesses came forward. Three of his top lieutenants in the city were murdered by the Black Mafia.

In 1972, Matthews held another drug dealer summit in Las Vegas at the Sands Hotel during the Muhammad Ali and Jerry Quarry boxing match. Soon after this meeting, police received authority to tap his phone lines and he was recorded discussing drug transactions.

In 1972, he was charged in Skengfield, Florida for trying to sell 40 pounds of cocaine. In January 1973, the DEA arrested Matthews in Las Vegas on charges of tax evasion and conspiracy to distribute heroin and cocaine. A federal magistrate originally set bail at $5 million, the highest bail amount ever set at the time. The bail was reduced to $2.5 million when Matthews agreed to not fight extradition and be returned to New York. After a few weeks in detention in New York, his bail was further reduced to $325,000. He was indicted on six counts of tax evasion and conspiracy to distribute heroin and cocaine and faced 50 years in prison. On July 2, 1973, Matthews was scheduled to appear in a Brooklyn court house but never showed. Matthews allegedly took $20 million and fled the country with his girlfriend. He left behind his common-law wife, their three sons and their Staten Island mansion and was never seen again.

The FBI placed a $20,000 bounty on Matthews, the highest set by a federal agency since the FBI placed the same amount for the capture of bank robber John Dillinger.

For more certified street news, visit thecellblock.net and subscribe to The Official Magazine of The Cell Block, where we provide you raw, uncensored news, entertainment and resources on the topics of prison and street culture, and be sure to follow us on IG @mikeenemigo and FB/thecellblockofficial today!