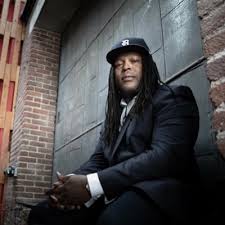 Shaka grew up on the east side of Detroit in the same neighborhood as street legends The Best Friends, Chambers Brothers, and White Boy Rick, where he sold crack during the 80s. After getting shot on March 8, 1990, Shaka became paranoid and vowed to never leave home without his gun. He ran the streets fuming with anger and despair.

“I had become obsessed with carrying a gun, treating my 9-millimeter Taurus like a crackhead treats his pipe,” Shaka recalls. “I went to bed with my gun, woke up with it, and wouldn’t so much as take a dump without it being in arm’s reach. At the first sign of confrontation, I was ready to shoot.”

And fourteen months after being shot, he would do just that – shoot a man to death.

Shaka was ultimately sentenced to “17 to 40 years” in prison. He went to prison angry at the world. One day, a fellow prisoner named O’Neal-El introduced Shaka to street lit. “He told me he was trying to finish a book he’d been writing about his old neighborhood. O’Neal-El was a member of the infamous drug crew Young Boys Incorporated, and his book was a collection of stories loosely based on his experience in the streets. He asked me if I wanted to read one of his stories, and I laughed at the idea of an inmate writing a book. But I didn’t have anything else to do, so I said yes.

“When I started reading O’Neal-El’s stories, I couldn’t put them down. The stories were only 80 or 90 pages long, but they were detailed and vivid. When I finished, I felt like I had grown up alongside O’Neal-El and his crew, wearing Adidas Top Tens, fur-lined Max Julien coats, and wide-brimmed campaign hats.”

When Shaka explained to O’Neal-El how much he enjoyed his book, O’Neal-El suggested Shaka check out the books by Donald Goines, also from Detroit. Shaka went to the prison library and checked out Goines’s book Eldorado Red. When he got back to his cell and began to read, he was hooked from the first page. “Goines’s vivid tale of inner-city life and the underground lottery had me in its spell, and his ability to articulate the pain of the streets validated the anger, frustration, and disappointment I felt toward life in the hood,” Shaka said. “Goines placed me back on the streets of Detroit; he made me feel alive again. I read the whole thing that night.

“By the time my next callout came, I nearly ran to the library, and when I got there, it was as though the clerks had known I was coming. They had watched other inmates become intoxicated by Donald’s work, and they knew I would be back. They smiled as they handed over Dopefiendand Whoreson, the books they had reserved for me. I took the books in my hand as though they were the Holy Grail and rushed back to my cell, where I proceeded to read through the day and late into the night. By the time I lay down at three in the morning, my eyes burned with strain. But I couldn’t wait for sunlight so that I could keep indulging what was fast becoming my deepest passion.”

Goines’s books were not the only books Shaka read. He also read books by other prolific Black authors like Malcolm X, George Jackson, Angela Davis and more.

Eventually, while in the hole, Shaka discovered the magic of writing, first with letters. “It was through these letters that I realized writing could serve as a means of escape. With a pencil and a piece of paper, it was almost like I could travel outside of prison and go wherever I desired. I could stand on the corner in my neighborhood, and no one could stop me. I could drive down the freeway to see my ex-girlfriend in Ohio, and the bars and wired fences couldn’t hold me back. The writing was freedom, so I wrote till my fingers were sore,” Shaka says.

In 1994, while in Michigan Reformatory, Shaka decided to write an article for the prison newspaper about his sister’s battle with crack addiction and how it made him feel. “I didn’t give it much thought, but a month or so later, the article prompted a conversation that would change the course of my life.”

When Shaka went to his work assignment the next day, his supervisor was reading the newspaper. “He kept looking up from the newspaper and then at me, with a curiosity that I hadn’t recognized before.”

“Shaka, did you really write this?” his supervisor asked.

“This is really good, Shaka. I want to take it home and share it with my wife.”

“The next day he told me that his wife, who was a magazine editor, though I had a future as a writer. I had never thought of writing as something to be taken seriously. I was serious about reading, of course, but the only future I could dream of was one where I simply got out of prison and went on with my life. I had never thought of becoming anything other than free.

“But Tom’s words stayed with me. It had been a long time since someone had said something affirming about me that wasn’t connected to violence. It made me feel like I could be good at something other than hustling drugs and hurting people.”

Unfortunately, Shaka would end up in the hole again for hurting someone – a guard. But while there, he began a transformation, and in no small part due to another form of writing – journaling. “Each time I filled a page of my journal, I felt as if a great weight had been lifted. No longer did I feel the old familiar bitterness; I was learning a new way to get it out. No longer did I need to carry my anger around inside of me in a tight little ball, keeping me one provocation away from the explosion.”

Shaka also began to write books. The first one was a novel called Shadowatchers, which was about a group of young men and women who vow to make their neighborhood a better place after speaking to the ghosts of famous civil rights figures like Rosa Parks and Malcolm X. He also penned a novel called Flagrant Foul, which followed the story of a young woman who is sent to prison after getting into her boyfriend’s car that turned out to be loaded with drugs.

By April 2004, Shaka was finally released from the hole, back into the general population. “Once I got into the general population, one of the first things I did was get a word processor and go straight to work typing out the books I had written on prison stationery while I was in the hole. By the time I was released, I was on my third novel, a detective story called Crack. It was my favorite of the three because it allowed me to take readers on a journey through the underbelly of street life.

“Day after day, I pecked away on my five-year-old word processor. Every thirteen pages, the memory would fill up, and I would have to print out all the pages, clear the memory, and start typing again. I was in a cell by myself, so I was able to sit for eight hours at a time typing. Still, it took several days of working from breakfast to lights-out for me to finish a manuscript.”

Shortly after, Shaka was transferred to a lower-level prison. As he settled into his routine, he met a guy named Anthony Moorer who knew a lot about urban literature and had started a publishing company on the outside. “Anthony gave me a lot of pointers. He told me that if I saved up enough money, I could hire an editor and a graphic designer to publish the books I had written. He and I would walk to chow every day, talking about the future and how we would work together in the publishing business when we were released. Those conversations kept me inspired and motivated.”Shaka began to read everything he could on self-publishing, the publishing business, etc.

Eventually, Shaka met a woman named Ebony who held him down and supported his writing dreams. They became romantically involved, and together started a publishing company called Drop a Gem Publishing, to printand release their first novel. In addition, they also partnered with HOPE to publish a book for children with incarcerated parents. Shaka also began to write for anthologies and national magazines.

Finally, after 19 years in the belly of the beast, Shaka was released on June 22, 2010. After getting reacquainted with family and friends, Shaka went to work trying to gain traction with his writing career.

This did not come easy. He was met by several challenges as he tried to hustle his books at local bookstores, and hoods that were not the safest places to be. Passionate about mentoring at-risk youth, he applied for a grant being offered by BMe (Black Male Engagement). “Ebony and I submitted a proposal for a twelve-week mentoring program that would teach at-risk youth to use writing to process their emotions and get at the root of their anger and frustration – an idea I had gotten after seeing two of my nephews and one of my childhood friends get shot the previous summer. My hope was that, with the guidance of a mentor and the self-examination I had discovered through literature, children in our community could begin making sense of their environment and receive the love, acceptance, and guidance that they needed to thrive.

“A month after submitting my proposal, I got the news that I was one of the winners of the BME Challenge. I couldn’t wait to implement the project at the schools where I had been mentoring.”

In 2013, Shaka published his memoir, Writing My Wrongs: Life, Death, and Redemption in an American Prison, under his publishing company, Drop a Gem Publishing. It’s a “page-turning portrait of life in the shadow of poverty, violence, and fear; an unforgettable story of redemption, reminding us that our worst deeds don’t define us.” The book was so successful, it was picked up by Convergent Books, an imprint of CrownPublishing Group, who would republish it in 2016. The book would go on to become a New York Times Bestseller, and also in 2016, Oprah would name Shaka as one of her Super Soul 100 lists of visionaries and influential leaders. Because of Shaka’s work in the community and the courage to share his story, he’s received fellowships at the MIT Media Lab and the Kellogg Foundation, and he’s been invited to speak at events like TED and the Aspen Ideas Festival. He lectures regularly at universities and is a leading voice on criminal justice reform. He’s currently working on his next book, which he says will probably be his last nonfiction book, as he wants to get back to writing fiction.

Mike Enemigo is America’s #1 incarcerated author. He specializes in writing about prison, the streets, and How to Hustle & Win Legally. For more articles like this, go to thecellblock.net and subscribe to The Official Blog of The Cell Block, where we provide you raw, uncensored news, entertainment, and resources on the topics of prison and street culture from a true, insider’s perspective, and follow us on social media @mikeenemigo and @thecellblockofficial.