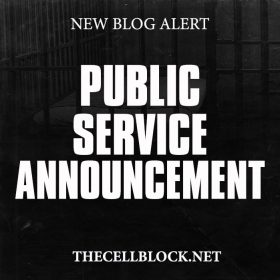 Where I come from, and when I came up, you had three ways of earning respect: 1) You was a certified gangsta, known for drillin’; 2) You could rap your ass off (this was 1993-1994, before everyone was a rapper); or 3) You was a dope dealer, ballin’. That’s it. We didn’t even have a sports dream in my hood. In fact, if you played sports, you was a square. You gotta go to practice? Bruh, we tryna hit the block.

Wanting to be respected by my peers, just like everyone else at that age, I participated in all three of the above to get mine’s: I drilled shit, I rapped, and I sold dope. Eventually I got cracked, though, and sent to the California Youth Authority for over two and a half years; got arrested for drillin’ three times in one week.

From that I decided being a professional driller probably wasn’t the best idea and I began to restrategize… I got it! When I get out, I’ma sell dope, stack, produce my rap CD and get rich off the rap game! I got this! I told y’all I was the one!

So, I got out at the end of 1997 and began putting my master plan into motion. I began pushin’ yayo, gettin’ a little money, and recording my songs. All was going well, and on February 23, 1999, I got a call from Big Hollis, the biggest producer in my city at the time; he wanted to sign me. Didn’t I tell y’all I got this, bruh?

High off of what I considered to be success, already spendin’ the “millions” I was sure to make from my microphone massacres, I went home, sat on my couch, kicked my feet up and lit a Camel fatty. Ah… the good life.

Then the police busted in my house — “parole search.” During the search, they found a pistol. Back to jail I went. I ended up getting 7 months for that. I had to do 4 months and 20 days, if I remember correctly. Then I’d be back to the studio, hopefully with Big Hollis. But it didn’t happen that way. Instead, after my 4 months and 20 days was up, I was picked up by the California Youth Authority: they wanted their year violationfrom me for gettin’ cracked with the strap, an obvious violation of my parole conditions.

Fuck it, bruh. It’s nothin’. I’ma knock out this year, then live in the studio. I think Big Hollis will still fuck with me. I just gotta stay out of trouble — a bit of a challenge to pull off in the California Youth Authority — so I can get out without catching time, etc. And I did. I didn’t get even one write-up!

The game is good, bruh! I was going to parole on May 22, 2000, then get straight back to the studio so I can murder some beats!

However, on May 19th, 2000, I was served with a warrant by the Sacramento prosecutor for a 1998 murder. In October of 1998, someone tried to rob a drug dealer of approximately 100 stacks worth of dope. Someone in the house ended up getting killed. Prosecutor said it was me. In 2002 I was sentenced to life without the possibility of parole. Ain’t been out since February 23, 1999. (If you want to read about the case, check out my book Conspiracy Theory: A True Story… of Lies).

So, I’ve been in prison for many years. However, during my time, do you think I’ve lost my money-motivated ambitions? Fuck no. Not even a little bit. I’ve just had to get it in a different way, one I explain in many of my books. But, along the way, I’ve learned a tremendous amount about business in general. It’s become my passion. Some people go to school a few times a week for 4 years; I’ve read and studied every day for the past 20+. So, yeah, I’ve learned a thing or two. And here’s one of the biggest things I’ve learned over the years: crime is not worth it. And more than that, crime is played out. Straight up.

I’m not saying this to appeal to some kind of moral compass; that is not my argument here. I say crime is played out simply because it’s not strategically intelligent under today’s circumstances. Not only is the risk huge, and the loss almost 100 percent of the time outweighs the gain, but because with today’s technology and resources, it’s not even necessary.

See, when I was out, I was hustlin’ and taking chances to pay for studio time, which was really expensive and hard to come by then. But now you can pretty much make your own studio with a computer, mic, and a few programs, some of which you can get for free on line. Last I was out, not a lot of folks had cell phones. Now, everyone, including kids, have them. The Internet? I had none of that. No social media, nothin’. So, for these reasons (lack of opportunity), I chose to invest my time into illicit activity for cash.

But now? All of the things I just mentioned (and more!) are available, and it’s changed the game. Over the years I’ve learned many, many ways anyone can make money with what has become today’s “basics” (Internet, social media, cell phones, etc.). Problem is, I think, is that most folks have become too accustomed to having such resources that they are not able to see the tremendous advantages and opportunities they provide. Not only do most of y’all take this shit for granted, y’all’ve gotten lazy because of it. I, on the other hand, see clearly the opportunities that exist. Maybe this is due to me being forced to exercise certain muscles in my brain that build resourcefulness, as thinking outside the box in order to make something out of nothing has been necessary for my survival, who knows. One thing I do know; I don’t take shit for granted.

For these reasons and more, it has become my passion to learn how to hustle and win legally, to learn how I would BALL if I were to ever be let out of prison, and without doing anything that would land me back in the devil’s playground. Not only has it become my passion to learn it, but to share it with my people — my people in the Belly of the Beast. And that’s what the majority of my books are about. I write to provide prisoners and street hustlers the information necessary to hustle and win LEGALLY in y’all quest for wealth, prosperity, and the lavish lifestyle. I show you how to get A LOT of money, LEGALLY, so you remove as much risk as possible from the risk/reward ratio when conducting your money-motivated moves; ya dig? I show you what “they” don’t want YOU to know.

I believe in this very passionately. THIS is the future of hustlin’. And my methods are proven, as much of it, in some shape or form, I am doing, even from my prison cell. And for those of you who’re wondering; I am doing very well. I’m making more money now than I ever did off of any illicit activity; especially when you consider the enormous costs I’ve paid for them.

About the Author: Mike Enemigo is a successful “prisonpreneur” who turned his dirty hustle clean. He’s the founder and executive publisher of The Cell Block, a company that only publishes works created inside prison. Among them are Hood Millionaire: How to Hustle and Win Legally! And Hood Millionaire’s CEO Manual: Start A Business, Be A Boss!For more info, visit thecellblock.net.