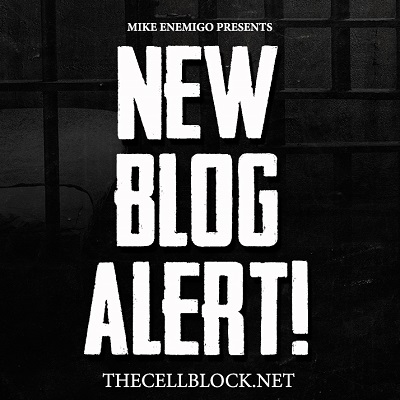 When criminal defense attorney William Kroger visited his clients in California prisons, he noticed that just a few months behind bars seemed to whip many of them into shape. Because the state had removed all weightlifting equipment from its prisons over 20 years earlier, Kroger wondered: How were they getting those impressive results? So, he enlisted personal trainer Trey Teufel to find out.

“By wrapping up 50 or so magazines in bed sheets they created dumbbells that varied from 35 to 50 pounds,” he said. “They would also do pushups with anther cell mate on their back to make them much more difficult.”

Learning from the prisoners, Kroger and Teufel wrote the book Felon Fitness: How to Get a Hard Body Without Doing Hard Time to help those not in prison get into shape. The “back to basics, kick your ass” workout may help with America’s obesity epidemic, Teufel said.

Some former prisoners, too, are taking what they learned during rec time and turning it into a legitimate livelihood.

After serving a seven-year sentence in New York state prisons on charges related to his former business dealing drugs, Coss Marte returned to New York City and in 44 2014 started ConBody – a series of fitness classes based on a workout routine he created in prison after a doctor told him his cholesterol and blood pressure were too high.

“I was not going to die in prison,” Marte said.

But with 230 pounds on his five-foot, eight-inch frame, the 23-year-old had perhaps five years to live, the doctor said. Marte lost 70 pounds over the next six months by developing a series of no-frills exercises that – because he was held in a six-footby-nine-foot cell – required no equipment.

“We [use] just our own body weight,” said Marte, who is now 32. “And we’re not just working out; we’re solving a real problem.”

Marte received $10,000 in startup funds from Defy Ventures, according to program manager Jose Vasquez, after his fitness business plan won a Shark Tank-style. competition. Just three years later, in May 2017, Marte moved the ConBody program into Saks Fifth Avenue’s health club, The Wellery. The space features cell bars, metal fencing and a backdrop for taking selfies that resemble mugshots. His routines are now taught by a staff of 10 former prisoners.

“I’m now at Saks. This is crazy,” Marte stated, adding that for both his out of shape clients and his formerly-incarcerated staff, “this is what it’s all about – giving people second chances.”

Second chances are also at the heart of A Second U Foundation, started by Hector Guadalupe, a former prisoner who shed 80 pounds off his 280-pound frame through prison workouts. A Second U has now teamed up with Complete Body gym in New York City to train “returning citizens” – as Guadalupe calls ex-prisoners – to become personal trainers.

Not everyone wants to give a “returning citizen” a second chance, however. Research by the National Institute of Justice shows that job applicants with a criminal record had only a 15 percent chance of receiving a callback or job offer, compared to 28 percent of those with no criminal record.

Toney Earl, Jr. with M.A.D.E. Transitions, a non-profit based in Rockland County, New York that assists former prisoners with re-entry blames many factors – including media portrayals that perpetuate stereotypes like “once a criminal always a criminal.”

“But if you can change people’s viewpoints, they often become our most passionate advocates,” he said.

Those who try the prison-based exercise programs also become passionate advocates for them.

“I knew it would be really intense with the prison-style workout,” said Alyson Michalak, an occupational therapist. “I feel like I worked a lot harder here.”

“That’s why people like it,” Marte added. “At the end of the day, they’re highflying and they feel good.”

Marte published a book in 2018 titled ConBody: Do the Time, to help those who cannot get to his gym. Meanwhile, former UK prisoner L.J. Flanders wrote Cell Workout, a fully-illustrated guide on branded apparel. He also speaks at schools and detention centers, hoping to deter kids from falling into a life of crime like he did.

“I have tons of people supporting me and helping me along the way,” he said, referring to his personal story to make the point: “People can change.”

For more certified game, go to thecellblock.net and subscribe to The Official Magazine of The Cell Block, today, and be sure to follow us on IG @mikeenemigo and FB/thecellblockofficial.