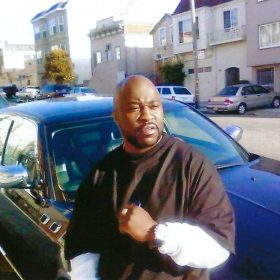 Mike: Introduce yourself to the people. Who are you, where are you from?

The Minister: They call me Minister. I’m from East Oakland [California].

How was life growing up in East Oakland?

For me, life wasn’t about if you would jump off the porch, into the Game. The question was when you would make that move, and how much you knew before doing it, you feel me? Just like the generation before me, we had the same gangs, same hustles, same police, same choices.

What got you into the Belly of the Beast, and how much time are you doing?

I had a case that started with human trafficking/pimpin’, kidnapping, and a bunch of other charges that come with it. I went to trial and got convicted of mayhem and false imprisonment. They gave me 20 years.

When and why did you start writing?

I started writing in jail. I began by writing letters for other inmates, then I started writing custom-made short stories for prisoners where I’d write about specific people, places and things and they stared selling. For example, I’d write a 50-page story about a dude and his chick robbing banks, or a man and his crew running a drug empire. I’ve always been sharp and creative.

That’s dope. An interesting way to start. What genre or genres do you write?

My first two books, Church and The Trusted Circle, are both urban fictions. I write mostly about the streets – the rap game, the dope game, etc. – because it’s what I know. but I also just wrote a book I wish I had when I was growing up titled The ABCs of Adulthood, which is 26 words all kids should know, and what they mean.

I like that. I have something for the youth, too, on the way, titled Lessons of the Game. In fact, maybe you can contribute a few jewels.

Got you. Let me know what you need and it’s done.

Who were your inspirations when it comes to this writing game?

I can only be honest; The Cell Block and Lockdown Publications are the two companies I’ve emulated from a distance, and where I get some of my motivation from. And Don Diva, too. All men who refused to let prison dictate their vision or ability to become successful.

I’m honored to be a part of that. So how would you describe your writing style?

It’s versatile, depending on the subject. However, it’s always Game related and educational. I try to mix real Game and information with education so the reader gets some jewels that will be with them forever as opposed to just entertainment with no other real value.

Tell me a little bit about your books Church and The Trusted Circle.

Church: The Laws of the Streets is about a Cali boy named Magic who gets into the Game, and with the help of his father and uncle, who’s in the feds, he beings climbing the success ladder. He does his best to follow the laws of the streets as he goes through what every other person living this lifestyle goes through – dope, sex, pimpin’, fraud, and all types of other hustles – yet stays in school, has a few legit businesses,etc. – I don’t wanna give it all away. In the end, however, he has to decide if he’s all-in or not; he has a choice to make because he can’t continue to straddle the fence, you feel me?

The Trusted Circle is about a crew from Oakland who gets into both the dope game and the rap game, but is forced to learn about both the hard way. It’s a twisted hood love story that has everyone writing me asking for part two, which will be out a little later this year.

And The ABCs of Adulthood is as I explained earlier. It’s currently on the dressers of all three of my own teenagers.

I’m looking forward to reading those. Since writing your first book – or all three of your books, rather – what have you learned?

I’ve learned that I do my best when I’m writing about what I know, and I’ve learned to welcome constructive criticism and appreciate help, guidance and advice.

What are your writing goals?

To continue to produce quality work, and to also establish a foundation for other writers, from around my way and beyond, so they can share their talent with the world. My publishing company is called The Trusted Circle 73 and I’m looking forward to its growth.

What would you say is the secret to your success?

The ability to mix entertainment with education, as well as my drive and ambition. Against all odds, I find or create a way to get a quality project done.

What would you say to someone who wants to do what you do?

Do you! Just like any other business endeavor, hard work, vision and commitment will produce success. Also, success looks different to different people, so it’s important to have your own definition of success.

What are your three favorite books?

Ultimate Sacrifice, Odessy of Ulysses, and The Keys by DJ Khaled.

What are you working on now?

The ABCs of Relationships– part 2 of my 3-part ABCs series. It’ll be out this year.

The first thing I do once I wake up is get my cell in order so it will be clean, organized, and ready to go for the day. Then I tackle my workout, which lasts about 45 minutes to an hour. While I’m bustin’ down I think about the rest of my day and all I gotta do –what business I have to handle, both in here and on the phone. After that, I’m in the lab, writing. I write no less than an hour and a half a day. Often more. But that’s how I get a project done, by keeping it moving. Once that’s out the way, I might politic a little bit with my loved ones, you feel me? Just being present and active. At night I shower, spend an hour on the phone, then review my day and figure out how I can do better the following day.

Yeah. Each one teaches one; incarcerated lives matter, and trust the ones who teach you while remaining trustworthy towards the ones you teach.

Mike Enemigo is America’s #1 incarcerated author, with over 25 books published and many more on the way. He specializes in writing about prison and street crime, as well as how-to books for prisoners and hustlers. Learn more about Mike and all his books at thecellblock.net, where you can also follow his blog, on IG @mikeenemigo and Facebook at thecellblockofficial.