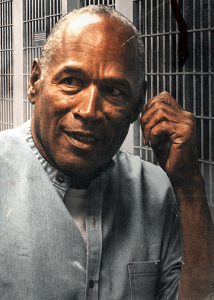 We all know OJ Simpson, Heisman Trophy winner and NFL Superstar who, in 1994 was arrested for the brutal murders of his ex wife Nicole Brown-Simpson and her friend Ron Goldman. In 1995, after the “trial of the century,” he was acquitted of both murders, though most believe he did it. In 2007 OJ was arrested again, but this time in Las Vegas, for armed robbery and kidnapping. In 2008, he was found guilty and sentenced to 33 years, where he was ultimately sent to Lovelock Correctional Center, in Lovelock, Nevada. There, he met and befriended inmate-author Vernon Nelson, who was ultimately granted a true, never before provided, insider’s perspective into one of America’s most notorious men.

I tapped in with Vernon Nelson to ask him about his life, his time with OJ, and what you can expect from his new book, OJ’s Life Behind Bars.

Mike: Introduce yourself: who are you, where are you from?

When and why did you land in prison, and do you have a release date?

I got locked up in January of 2002. I was 22 at the time and wasn’t conscious of the company I kept in the party lifestyle I was involved in. I started dabblin’ in a lil pimpin’, and ultimately got caught up in a situation where I was I was charged with sexual assault. It’s a long story, but I go before the parole board in just under 2 years. The nightmare is almost over.

When and why did you start writing?

I started writing raps in the 90s, at about 15 years old. My dad got me into it. He was a tour manager for big-name hip-hop artists like Busta Rhymes, Wu-Tang Clan and several others. He used to let them listen to the music I’d recorded, and this led them to inviting me to perform on stage with them a few times. It was a great experience. When I got locked up, instead of raps, I began writing poetry, then transitioned to writing short stories, and ultimately books, in 2009. I’ve always had a wild imagination, and I enjoy entertaining people — making them think.

How and when did you first meet OJ Simpson?

I first met OJ in 2015, in Lovelock Correctional Center [Nevada]. We were both in the pill-call line and struck up a conversation.

What was your first impression of OJ?

Honestly, my first impression was that he was arrogant and felt he was better than everyone else.

What gave you this impression?

Just by the way he moved and interacted with the other prisoners, as well as how he’d sometimes talk to people. He kinda talked down to people as opposed to to them, you feel what I’m sayin’?

Yeah, I get it. I know people like that. You guys ultimately became “friends”; how did this happen?

We became friends because I’d written a few books and OJ was interested in my work. We spoke about me potentially writing about him. One of my associates, Greg H. was really close with OJ, and he definitely helped cultivate the relationship between OJ and I.

What was OJ like in person as opposed to what we all see on TV?

To be honest, I was disappointed in the real OJ [as opposed to what we see on TV]. I mean, when you see someone on TV, you’re seeing what they want projected to the world, which is often not who they really are. The OJ I saw on TV is a super hero, so my expectations were very high. But after just a few conversations, I began to see who he really is, and I felt very let down.

How did the guards and other prisoners treat him?

It varied. Some of the die-hard football fans, both guards and prisoners, adored him and were star-struck — they were excited to be around a celebrity. But the few people who actually got to know OJ as a person, I can’t tell you one who has anything good to say about him — outside the one act of kindness from OJ I mentioned in the book. The fact of the matter is, OJ ain’t a real nigga — a real black man — and the black community inside prison saw that up close and didn’t like it one bit. OJ is whitewashed — an Uncle Tom. He doesn’t care about anybody but himself. He most certainly doesn’t care about black folks.

Did OJ ever mention the robbery to you, and if so, what did he say?

Yeah, he mentioned the robbery. In his opinion he’s the victim. OJ was always on the poor-me bullshit. He talked a lot of trash about his co-defendants, saying they’re the ones who should have went to prison, not him. To this day he doesn’t think he ever did anything wrong. I don’t think he will ever take responsibility for anything.

Did he ever mention the situation with Nicole — the murders?

Yeah, he spoke about the murders. Of course, he blamed Ron and Nicole and said they had it coming. He mocked their facial expressions as he bragged that he stabbed them repeatedly. I couldn’t believe what I was hearing. It was definitely a surreal moment for me.

Why did you decide to write this book?

I decided to write it because I felt like the world, and especially those who supported him during his murder trial, deserve to know the real OJ — the one I got to know in person. I was fortunate enough to be granted a real, inside-view that most will never see, and I wanted to share that.

What do you hope people take away from the book?

Honestly, what I hope people take away is the truth — that OJ is a dirtbag. He doesn’t care about anybody but himself. He’s not the “hero” we all thought he was. He admitted the 1994 murders to me and even laughed about it. Honestly, I think he’s an extreme narcissist — maybe to the point of being psychotic. I captured all off this in the book and more.

Any last words before we go?

For anyone who is interested in OJ Simpson, football, true crime or even pop culture, be sure to check out my new book, OJ’s Life Behind Bars, by Mike Enemigo and Vernon Nelson. You can get it at thecellblock.net, Amazon, or all the other online book retailers. Trust me, you won’t be disappointed.

Mike Enemigo is America’s #1 incarcerated author, with over 25 books published and many more on the way. He specializes in writing books about prison and street crime, as well as how-to books for prisoners. Learn more at thecellblock.net, where you can follow his blog, on IG @mikeenemigo, or by sending a SASE to The Cell Block; P.O. Box 1025; Rancho Cordova, CA 95741.