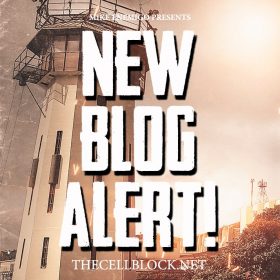 There are very few life stories besides O.J. Simpson’s that have so intensely attracted the interest of both the serious and prurient among us. We know all about his fame asa star athlete; we enjoyed his easy humor on the silver screen. But then came that incredible double dip into notoriety.

We were fascinated by the “trial of the century”; we felt both happy and unhappy, both stressed and relieved, when he got off, seemingly scott free — but no! Along came the civil court saying he was responsible for the crimes he was just acquitted from.

Then somehow, he stupidly got involved in a crime that sent him to prison. There are many who think his sentence was not just — after all, he was a first-offender, and nobody got shot or beat up. There was conjecture that he was committed only because someone thought he deserved time in prison for the first crime.

Now, we have a piece of the story we’ve barely seen, other than a few tips in the rags. The Cell Block, a publishing house founded by prisoner/author Mike Enemigo in 2010, presents a book by prisoner/author Vernon Nelson, who befriended (or perhaps better said, became a close associate of) Simpson in prison, and brings us “The Real Story” of O.J.’s life behind bars. There are plenty of revelations about “The Juice,”and some disappointments, too; think of it as the good, the bad, and the indifference. But these are stories you haven’t read before.

It’s a short read (70 pages about O.J., plus excerpts from Nelson’s earlier books), but honestly, it’s hard to put down. Don’t get me wrong — the excerpts that fill out the book are interesting in themselves, and they help us gain perspective on Nelson; they establish Nelson’s outlook and credibility.

If you’re looking for answers to some of those plaguing O.J. questions, and you’re willing to believe an I-was-there witness who does seem on top of things, and also has an engaging style — then you’ll find those answers here, and enjoy the read, as well.

Does he live like a king in prison? Was he treated special? Was he dragged down into the sordid life of prison? Did other inmates take advantage of him? Did he get into fights? Did he do the first crime? Why did he do the second? Any more crimes planned for the future? And more…read and see.